In recognition of the 5th United Nations International Day of Women and Girls (IDWGS) in Science, February 11, OWSD National Chapters around the world organized rallies, seminars, school outreach events and more — and one National Chapter held its official launch. Read on to learn how each Chapter observed this day. 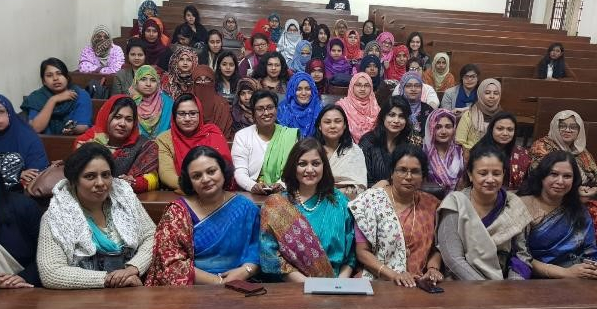 On the occasion of IDWGS, the OWSD Bangladesh National Chapter organized a rally in cooperation with the Bangladesh University of Health Sciences (BUHS), Dhaka at the BUHS campus, followed by a motivational discussion session for girl students and young scientists. Senior professors, early career women scientists and women undergraduate and postgraduate students from various departments participated in the celebration.

Additionally, the National Chapter held several smaller celebrations throughout the month of February in different locations around the country. As part of this series, they organized a seminar on 'The scope of OWSD programmes for female scientists' at the University of Rajshahi in northern Bangladesh. Around thirty faculty members from twelve departments, along with more than 100 students, attended the seminar. Sharmin Parveen, the Chair of the OWSD Bangladesh National Chapter, was the keynote speaker at the seminar, with Laila Arjuman Banu, Professor in the Department of Chemistry and Student Advisor at the university, present as distinguished guest. The programme was coordinated by Rubaiyat Yasmin, Professor in the Department of Information and Communication Engineering, and Farzana Ashrafi Neela, Professor in the Department of Botany. In her keynote speech, Parveen highlighted that just 30% of the world’s researchers are women. While a growing number of women are enrolling in university, many opt out at the highest levels required for a research career. In Bangladesh, the number of female students who choose STEM fields when they reach higher education is low compared to male students, and female students often struggle with cultural barriers, familial barriers, and a lack of role models that make it more challenging for them to enter STEM. The seminar had a positive impact on the girl students who attended, who are at the initial phase of planning their future careers. The event was covered by the popular regional daily newspaper Sonardesh. 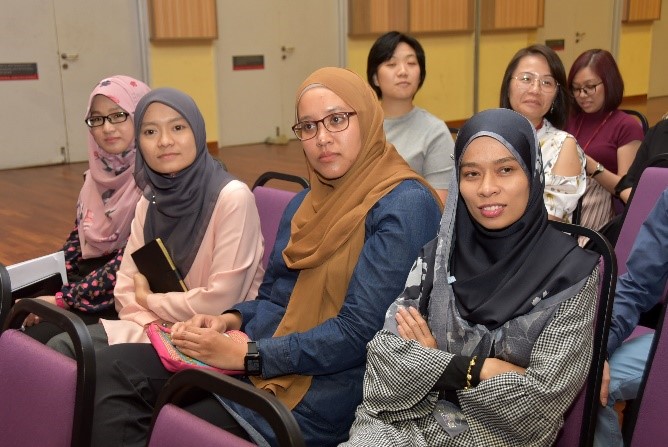 The OWSD Malaysia National Chapter, in collaboration with the UTAR Centre for Cancer Research (CCR), organized the 3rd Women in Science Forum (WIS 2020) at UTAR's Sungai Long Campus on 12 February to recognize IDWGS. The forum was attended by around 100 participants from private and public universities as well as research institutions.

“Having the OWSD Malaysia National Chapter is very important, as gender equality is still an issue that persists today." said Lim Yang Mooi in her speech. "This forum is intended to celebrate and highlight the presence and accomplishment of women in their respective fields, while providing a platform for women to share their talents, strength and experience, as well as to foster an environment which supports the professional and personal development of women.”

Presentations given during the forum focused on women’s roles in society and challenges to women's leadership (by Aini Ideris), how to write winning research proposals and scientific manuscripts (by Teo Soo Hwang), and the personality traits of women entrepreneurs (by Lim Yang Mooi).

"Everyone is born a leader regardless of your situation — it is your attitude and how you bring yourself that makes you become a leader," said Ideris in her talk. "When things are given to you, take them as opportunities because you will learn to acquire more skills and knowledge as well as to network with people.” 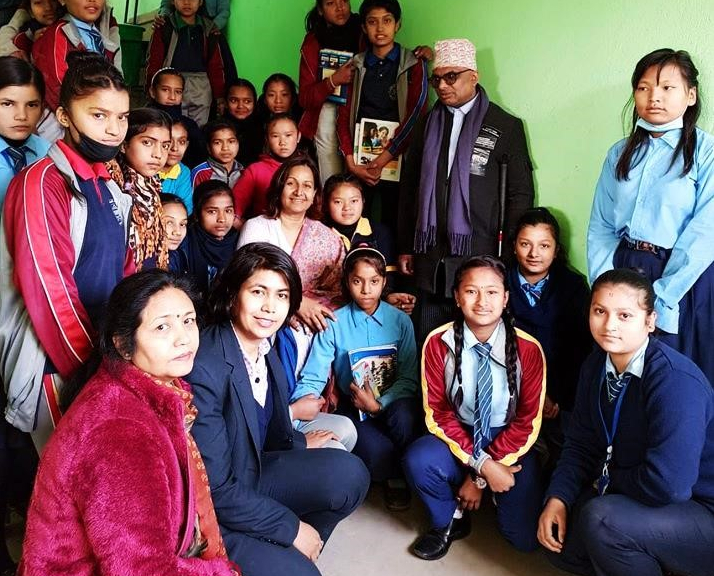 For the first IDWGS since it was established in February, the OWSD Nepal National Chapter organized the first in a series of Science Sensitization events for students. The event was held at a public school in Koteswor, Kathmandu. Three members from the National Chapter's Executive Committee - the Chair, Secretary and a general member - gave an hour-long talk to pupils from grade 9 and two teachers, which was followed by an enthusiastic Q&A session.  OWSD Nepal aims to continue the series on a monthly basis, targeting public schools throughout the country. 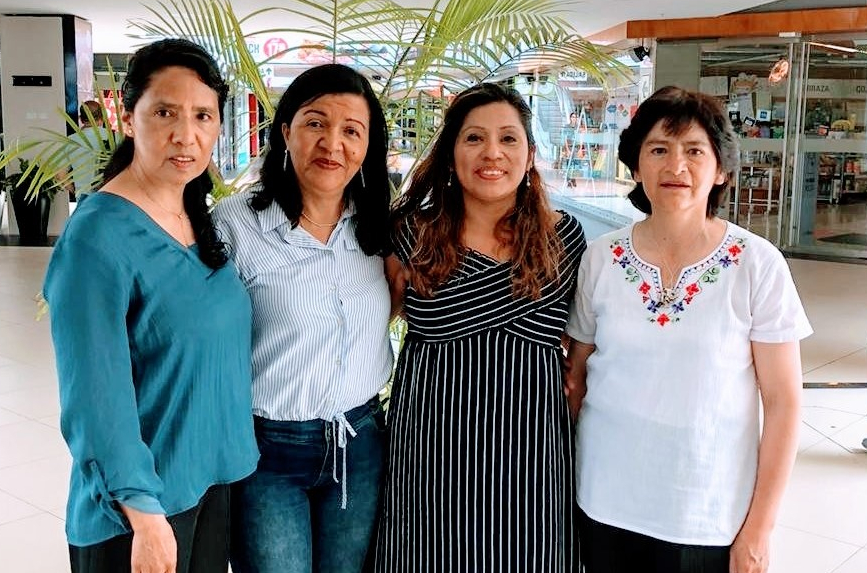 The International Day of Women and Girls in Science was celebrated by the OWSD Rwanda National Chapter on February 9, with a special breakfast meeting with the theme of “Investment in Equality in Science, Technology and Innovation in the Era of Digitalization for Sustainable Development," jointly organized by the National Chapter together with the Rwandan Association of Women in Science and Engineering (RAWISE), the National Commission for Science and Technology in Rwanda (NCST) and the Rwanda National Commission for UNESCO (CNRU). This event combined scientific talks, speeches by men and women leaders, and a panel discussion, all aimed at showcasing and highlighting the potential of Rwandan women scientists, their role and contribution to the development of Rwanda. It was followed by mentoring activities for high school girls. The breakfast took place at Hotel des Mille Collines in Kigali. Around 170 people participated, including 50 high school female students from rural schools and their teachers. Also present were leaders from different Rwandan institutions and organizations that support the inclusion and empowerment of women in science-related fields, including RAWISE and OWSD Rwanda National Chapter members.

The Rwandan Minister of Environment, Jeanne D'Arc Mujawamariya, attended the breakfast as the guest of honour. In her speech, she urged women and girls to pay attention to the importance of green growth, as they are often the most vulnerable due to exposure to wood and charcoal smoke, which most Rwandans use for cooking. Her full speech can be read here. 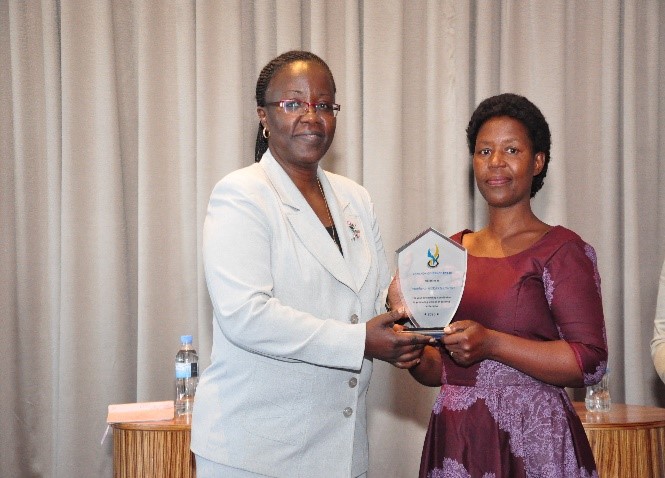 A highlight of the day was an award ceremony in which Josephine Mukarukundo, a former high school STEM teacher, was presented a “Champion of Science" award that recognized her efforts to encourage young female scientists, and celebrated her being a role model to students in the classroom and beyond. The day also included two flash scientific talks presented by RAWISE members: Janvière Tuyisenge of the Lake Kivu Monitoring Programme presented on her work monitoring the impacts of methane gas extraction on the lake; and Marie Chantal Uwayezu, a lecturer in mechanical engineering at IPRC Ngoma, spoke about her current PhD research developing new feed systems for Computer Numerical Control of machine tools.

The breakfast finished with a panel discussion, moderated by Ludy Schalkwijk of Career Women's Network Kigali with panellists Dominique Mvunabandi from CNRU, Sandrine Ishimwe from VVOB Rwanda, Alice Ikuzwe from RAWISE and the OWSD National Chapter, and Olivier Kamana from the National Industrial Research and Development Agency. In their discussion, they shared their views on how girls can become involved in the STEM fields and what their organizations are doing about it. Throughout the day, participants, especially young ones, had the opportunity to hear, chat and make connections with people coming from the various organizations represented. Some of the students had the privilege to engage personally with Minister Mujawamariya and the U.S. Ambassador to Rwanda during the networking session, which they found to be an incredible experience. After the breakfast, high school students had a short one-hour session with RAWISE and National Chapter members, who briefly shared their own life experiences as women in STEM. In the afternoon, the day concluded with hands-on sessions for the students, where they were introduced to robotics and programming in order to demonstrate the potential applications of STEM theories.

The OWSD Zimbabwe National Chapter, together with its partners STEMFEM Network, ZIE-WIE, FAWEZI, UNESCO, the Australian Embassy of Zimbabwe, Tech Women Zimbabwe, Campus Lifestyle, Purple Future Trust, Netro Electronic and Tofaraonline, celebrated IDWGS with the event “Investment in Women and Girls in Science for Inclusive Green Growth."  The event was attended by representatives from the Ministry of Women Affairs, Community, and Small and Medium Enterprises Development, as well as from the Ministry of Primary and Secondary Education and the Ministry of Higher and Tertiary Education. The event took place during the morning session at the Australian Embassy and during the afternoon at the University of Zimbabwe Science Center. 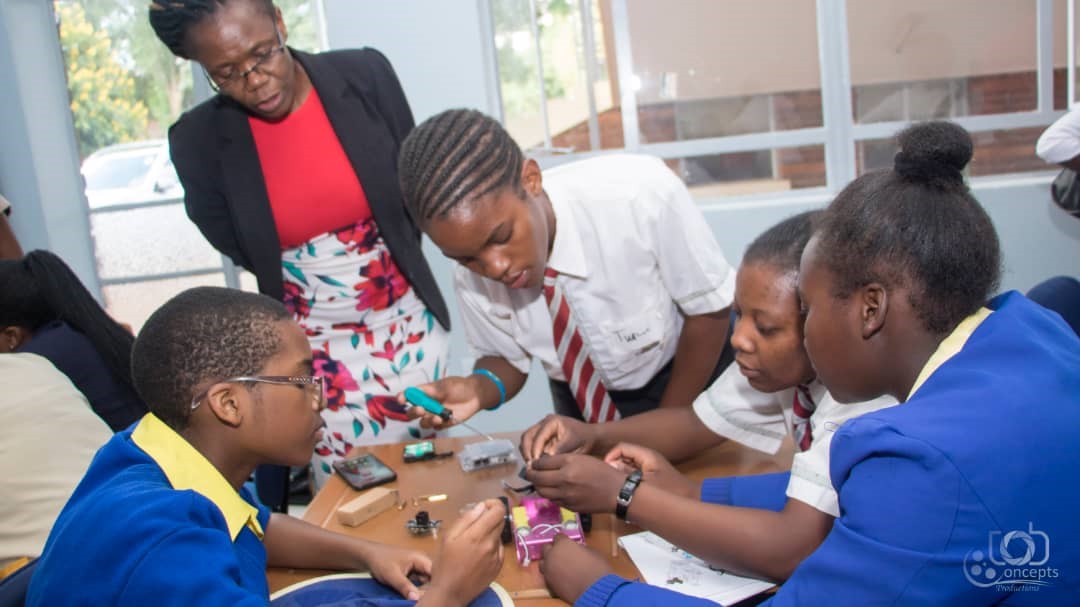 The event was opened at the Australian Embassy by Ambassador Bronte Moules, who explained that the IDWGS is an important reminder of how important it is to support and encourage young women and girls to consider a future in science, technology, engineering and mathematics. Other speakers included UNESCO Programme Specialist Koen Verbist, who spoke about the importance of bridging the gender gap in science, and Maud Muchuweti, the only female Dean at the University of Zimbabwe Science Center, who spoke about inspiring young students to love science.

The Chair of the OWSD Zimbabwe National Chapter, Fortunate Farirai, also gave a speech commemorating the day. She highlighted the importance of science and women in developing the nation and shared information about OWSD, highlighting its objectives and mandate. She also told her own life story in order to encourage the young women and girls present to love and carry on with science.

The celebrations also included the presentation of a journal, ‘Women in STEM: Volume 1,' designed by Tech Women Zimbabwe, ZIE WIE, STEMfem Network and the Ministry of Higher and Tertiary Education, to the Ministry of Primary and Secondary Education and the Ministry of Women Affairs, Community, Small and Medium Enterprises Development. The book is a compilation of success stories of women in science, meant to inspire young girls.

The event was attended by 80 students from ten different schools, who were grouped together with mentors to give the students an opportunity for one-on-one mentoring. The students then participated in a quiz session where they were asked questions relating to the theme of the day and science in general. Students were also able to participate in fun hands-on science activities, including building robots, assembling computers from Kano computer kits, and observing the process of 3D printing. These activities were intended to give them an idea of what science can do, and to help them relate this to the science learned in the classroom.