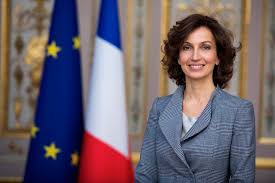 UNESCO Director General Ms. Audrey Azoulay called special attention to OWSD's achievements in advancing women in science in the developing world, in a speech on Tuesday, December 1 to a conference for the launch of the UNESCO Women and Science Chair at Paris Dauphine University.

"In the world of research, we offer opportunities of education, of career development and of networking to women scientists from the Global South, with the Organization for Women in Science for the Developing World, based in Trieste, Italy," she said, while describing UNESCO's many efforts in this area.

The Director General also pointed to the work of OWSD's partner organization TWAS, the World Academy of Sciences: "We foster the careers of women scientists after childbirth through a component named 'scientist-after-child scheme' recently developed by TWAS with the support of Germany."

"We also contribute in strengthening the presence of women in science through the L’Oréal-UNESCO "For Women in Science Programme," she went on to say. "And I would like to seize this occasion to thank L’Oréal for their constant support to UNESCO, for this Chair as well as on many other themes. And we act as well through the Organization for Women in Science for the Developing World (OWSD), the initiative 'One million Girls in STEM' and the United Nations Inter-agency Task Team (UN – IATT)  on 'Gender and Science, Technology and Innovation'."

The Chair at Paris Dauphine University will be the 14th worldwide to work on the challenge of promoting women's equal participation in science, and the 25th to work on general equality more broadly. There are 811 UNESCO Chairs in total.

"With its multidisciplinary approach, with its ambition to analyze inequalities in depth, this Chair refers to UNESCO's ideal: understanding reality in order to act on it," the Director General concluded her speech. "Because it is by knowing better the reasons that explain these disparities that we can make lasting changes."