OWSD has provided tremendous support in shaping my career as a researcher, science ambassador, role model for women scientists and a "think high" human being. 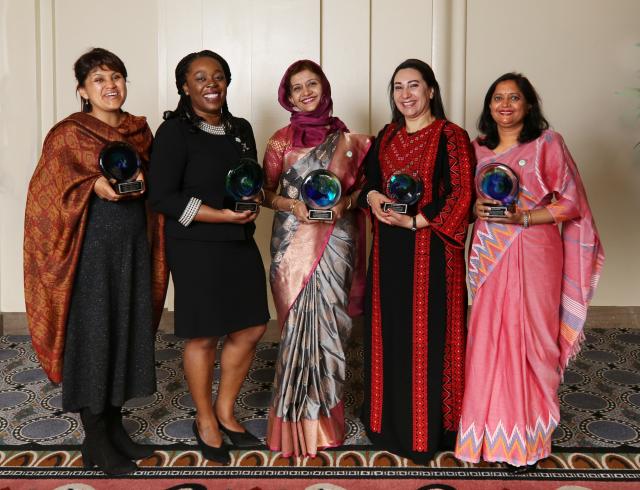 I am a principal scientific officer in the Microbiology Division at the Food and Radiation Biology Institute of the Bangladesh Atomic Energy Commission in Dhaka, Bangladesh. I have been with this research organization since 2003.

I work in the field of environmental biotechnology. My research focuses on the isolation of bacteria that can produce bioplastic polyhydroxyalkanotes (PHAs) from compost, wastewater and food waste. Currently, I am looking into the capability of radio-resistant bacteria for PHA production and in the remediation of wastewater by gamma radiation, which are not very much explored worldwide.  I also have expertise in the production of biohydrogen from waste biomass.

My research activities have a great potential to solve environmental issues as well as to generate useful products and renewable energy from waste biomass. Currently I am the pioneer researcher in Bangladesh in PHA research.

I always had a strong interest in doing my PhD abroad. The OWSD fellowship made my dreams come true. I started my PhD at Universiti Putra Malaysia, Malaysia in 2006 in the Bioprocess Technology Department, working on a project on the ‘Bioconversion of Palm Oil and its Products to Polyhydroxyalkanoates (PHA) Biodegradable Plastic.’ I was involved in developing pilot-scale extraction of low molecular weight organic acids after anaerobic digestion of palm oil wastewater. Our goal was to utilize these bioacids further as a carbon source for bacteria and to facilitate the bioconversion of waste byproducts into bioplastic, but this was a challenge from a microbiological point of view. My PhD research resulted in six publications, as well as a gold medal for one poster presentation at an inter-university exhibition.

During my OWSD fellowship, I lived for almost 5 years in Serdang, Malaysia. Other than acquiring knowledge about my research problem and hands-on experience with many analytical tools, I also gained exposure to working with people of other nationalities in my lab, and I got to know the culture and customs of local people in Malaysia. I have a passion for music and love singing, and I participated in several programs organized by the International Students’ Association in UPM. I visited many amazing places -- and I also learned and enjoyed bowling for the first time in Malaysia!

While I was doing my PhD, I was in frequent contact with members of the OWSD Secretariat; however, I never thought I might meet them or get to know them personally. I missed the 2010 OWSD General Assembly in Beijing because I was in the middle of my thesis submission, but I always thought how wonderful it would be if we could interact with the OWSD Secretariat.

After receiving my PhD in 2011, I returned back home and joined BAEC. In 2012, I was selected to take part in a workshop organized by the International Science, Technology and Innovation Centre for South-South Cooperation (ISTIC) and The World Academy of Sciences (TWAS) in Malaysia, where I first became familiar with TWAS and its activities to promote science in developing countries. In 2013 I applied and was accepted to a TWAS Science Diplomacy Workshop on Energy, my first time in Europe. It was an extraordinary course in terms of subject matter and participants. The next summer I was again selected to take part in the follow-up Science Diplomacy workshop, where I met Tonya Blowers and Paola Vespa from OWSD for the first time, as well as other OWSD members from countries including South Africa, Sudan, and Yemen, who all became friends.

Following a postdoctoral position at the National University of Malaysia from 2014-2015, I returned back to Dhaka. Through the OWSD mailing list, we receive an array of news, events, jobs and opportunities happening all around the globe, and in 2016 I saw a Call for Papers sent by OWSD for the first International Women in Science Without Borders conference. I wrote to Amal Amin, the conference organizer, and was invited to the conference as a speaker. This conference was my first occasion traveling to Africa.

In 2018, OWSD turned 25 and many National Chapters organized anniversary events to celebrate. OWSD’s National Chapter in Bangladesh was delighted to be part of the 25th Anniversary celebrations. We held a series of seminars, a meeting of alumnae and a day-long workshop in November 2018.  I learned a lot from OWSD board member Hasin Aupama Azhahari, who convened the programme, and also had the opportunity to meet Swedish ambassador Charlotta Sklyters. A new OWSD Bangladesh executive committee was formed, and we began our journey with high hopes and commitment. Just a few weeks before our celebration, I was also able to attend an international conference, UTKARSH, in Delhi, India organized by Atya Kapley, OWSD Vice President for the Asia–Pacific region. There I met OWSD President Jennifer Thomson and many other OWSD board members.

The world was getting smaller and I was in closer and closer contact with the OWSD Secretariat through frequent email correspondence. In late November, I was notified of being selected as one of the five winners of the OWSD-Elsevier Foundation Awards in Biological Sciences. It was huge news for me and all I could think to do was to pay my deepest gratitude to my mentors and parents. I would also never have been able to have access to the research facilities at UPM, Malaysia and to conduct world class research if I had not received the OWSD PhD fellowship.

"I am forever in your debt" - this was my message to OWSD on its 25th Anniversary video competition.

My latest experience with OWSD and the Elsevier Team in Washington D.C. during the Awards ceremony at the meeting of the American Association for the Advancement of Science (AAAS) was simply overwhelming. OWSD has provided tremendous support in shaping my career as a researcher, science ambassador, role model to women scientists and a "think high" human being.

So in short, through my involvement with OWSD as a PhD fellow, I was availed of many networking opportunities and greatly increased my mobility. Traveling from Asia to Europe was a great excitement, and from there to travel to Beijing, Bangalore, Trieste and finally to the United States and to be involved with activities organized by OWSD, TWAS, AAAS and the Elsevier Foundation. All these have been made possible because of being involved with OWSD.