The Chair of the Guatemala National Chapter Kleinsy Bonilla has been part of a team researching the development of a scientific workforce in Central America. Here they share their findings.

Developing countries face numerous challenges in the process of building their scientific and technological human capacity; particularly in relation to the training and accumulation of human resources or specialized human capital in science, technology and innovation (ST&I). The lack of organized and sustainable higher education options (masters and doctoral programs), non-existent or low-quality academic programs, lack of research-oriented study options, and other factors are strong contributors to the emigration of talented students from underdeveloped countries to developed countries. At the same time, the consolidation of a global knowledge-economy, the internationalization of higher education and the competition to attract foreign talent in the industrialized countries represent a difficult test for poor regions to keep their already scarce qualified human resources.

In the case of countries such as Guatemala, el Salvador and Honduras – which are considered to be underdeveloped not only in the social and economic aspects, but also in the areas of the science, technology and innovation – the challenges are even greater, since problems related to poverty, diseases of underdevelopment (malaria, maternal and child high morality), precarious productive and economic systems, natural disasters and climate-change emergencies and others, are given more urgency, and therefore public policies in ST&I are postponed.

Excluding societies, with large inequalities brought in since the colonial era, results in large portions of their most vulnerable population being excluded from any possibility of academic and professional development. Armed long-lasting internal conflicts – in the cases of El Salvador and Guatemala – have created strong barriers for different groups in rural areas to access education and reduced the possibilities of training and accumulation of highly qualified human resources to build up a critical mass.

On the other hand, the aforementioned countries have incipient democracies whose civil governments have created fragile institutions in general, and in particular there are very few initiatives to support the governance of science, technology and innovation sectors. As a result of this scenario, we can verify the insufficient existence of highly educated human resources with abilities in academic and scientific research.

A wider research topic undertaken by the authors of the present work studies the process of building capacity in science and technology in Guatemala, El Salvador and Honduras with the support of international cooperation, and as part of this inquiry a particular approach attempts to systematize the challenges and opportunities for building science, technology and research human capacity.

As proposed by Milèn (2001), capacity building is a continuous and dynamic process, builds on what already exists, the construction process has an intrinsic value in itself, allows dealing with continuous changes and is carried out in a holistic or integrated way. It has implications for the medium-long term. It has different levels and for the purpose of the present work the focus is placed at the micro level: individual - science and technology human capacity.

Research Questions to be addressed

1. Which are possible reasons explaining the shortages of S&T human capital in Guatemala, El Salvador, and Honduras?

2. What capacities should be built in S&T human capacity in Guatemala, El Salvador, and Honduras?

3. What support can international cooperation provide in the process of capacity building in human S&T capacity in Guatemala, El Salvador and Honduras?

The geographical scope addresses three countries located in the Central American sub-region: Guatemala, El Salvador and Honduras. These three nations comprise the northern part of the isthmus, sharing common features in their socio-economic development stage, pervasive poverty indicators, inequality and other problematic such as violence and organized crime. Expressly, three other countries of Central America were not considered for this analysis: Nicaragua, Costa Rica and Panama. The similar characteristics in terms of science and technology governance, public policy trajectory, as well as economic structures and challenges common to Guatemala, El Salvador and Honduras allow the investigators to identify similarities and differences.

Through the application of various methods in data collection, the robustness of the process is strengthened and the triangulation gives more validity to the study. Interviews with key actors in the public and private sectors relevant to science and technology. Also specific data collection took place with actors from international cooperation and the research communities in the three countries.

On-line comprehensive survey on S&T human capacity building – research communities: A mapping exercise carried out to identify databases composed by researchers in the three countries to apply surveys for greater representativeness and strengthen the quality and depth of the analysis. In this process it was determined that while Guatemala and El Salvador have registries of researchers with nationwide coverage, Honduras has only partial catalogs of researchers such as that obtained from the National Autonomous University of Honduras. 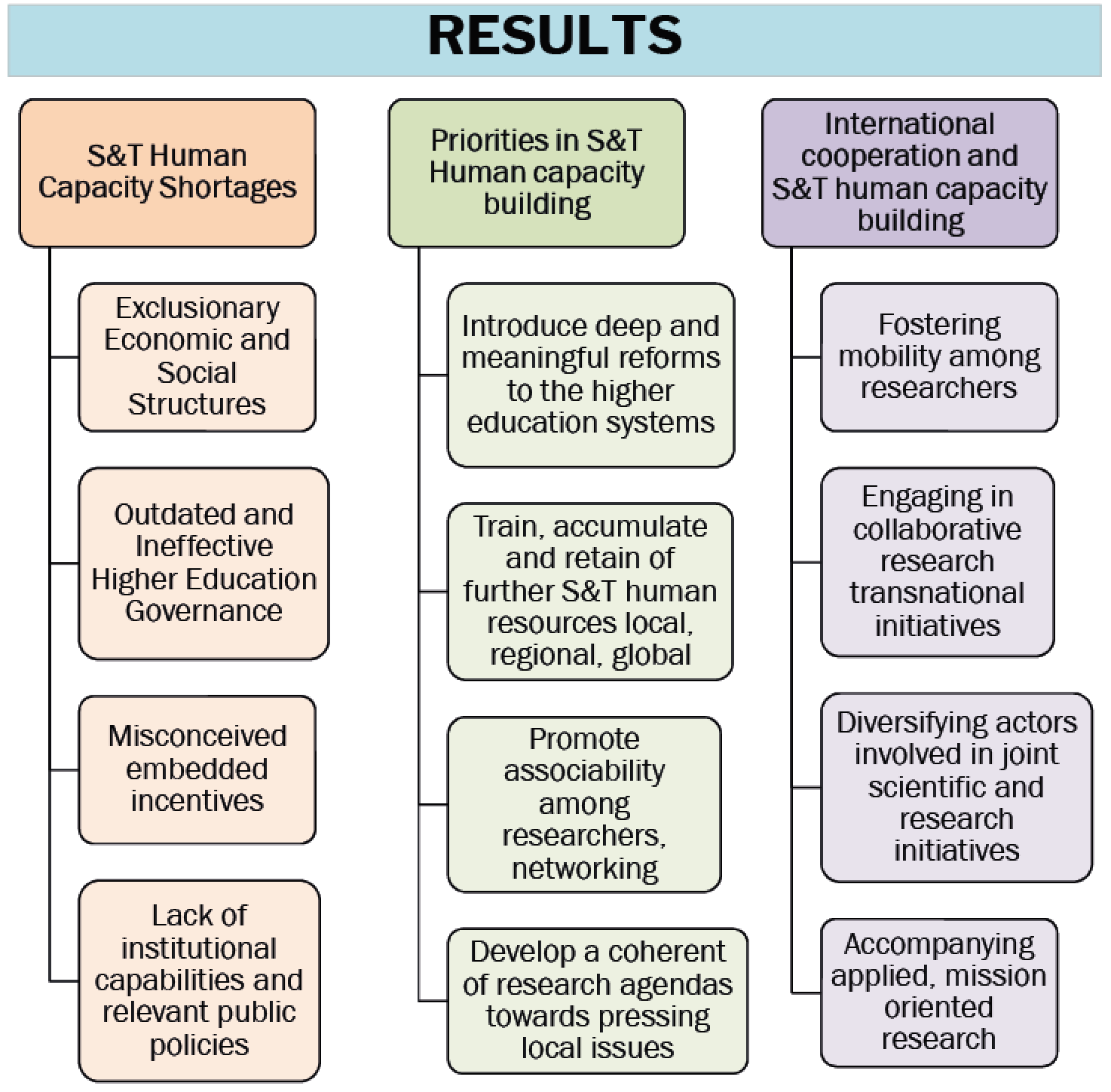 Milèn, A. (2001). What do we know about capacity building? An overview of existing knowledge and good practice . Geneva: World Health Organization